Spend 4 luxurious days in Waikiki, Honolulu before boarding the Pride of America for the best way to island hop Hawaii and play six of the islands most spectacular golf courses. Cruise in style, with 14 restaurants, 9 bars and lounges, spacious suites and lots of balconies – perfect for whale watching, witnessing Kilauea volcano or taking in the dramatic view of the Napali Coast. Pride of America visits four of Hawaii’s pristine islands and you’ll be amazed by each and every one.

Hawaii is home to exquisite and top-ranked golf clubs. Play six of the islands most spectacular golf courses including Mauna Lani, built from the volcanic rock of an ancient lava flow. We’ve hand-picked a selection of courses that bring the magic and ignite your golfing passion – golf courses that are a combination exclusive, private, and stunning resort courses set in inspiring settings.

This all-inclusive holiday with Pride of America ensures all your wishes come true. Touring with Go Golfing Travel means guaranteed departure – we never cancel. Your personable, experienced host ensures everything runs to plan. We invite you to discover more about this beautiful holiday.

Transfer to your hotel

Check in to Sheraton Waikiki

7 nights onboard Pride of America

Daily onboard meals during cruise

6 rounds of golf, including motorised carts at:

*Not inclusive of gratuities

From travel insurance to flights and hotels, we'll do all the organising, scheduling and booking.

Unpack once, settle in and feel right at home. Relax by the pool, enjoy a drink at the bar as you carelessly cruise to your next destination.

Do what you love, we do the rest. Playing golf at each port of call is smooth sailing. Getting to and from courses is a breeze.

Golfer Single – TO BE CONFIRMED

Upgrade to Balcony Twin Share from TO BE CONFIRMED

Note: NCL no longer offers separate baggage room facilities aboard their ships. Golf clubs will be stored in your cabin (under bed storage). Need help to transport your golf clubs on and off the ship? Please let us know so we can advise options.

Playing a course that was carved out of lava – Mauna Lani – was an amazing experience. The ship was great and the organisation excellent. I especially valued how hard our host, Peter, worked to ensure we all had the best possible time. Hawaii was beautiful and we had the chance to appreciate it’s uniqueness.

I thouroughly enjoyed playing the magnificent golf courses. Travelled with a lovely friendly group of golfers and made some great friendships along the way.

All was planned exceptionally well. Highlights was everything. Made many new friends, had lots of laughs. I would highly recommend this tour to anyone.

Extremely well-organised trip visiting and playing golf at top courses which were individually picturesque in their own ways. Loved cruising and moving to the different locations.

The tour was very well organised, all golf courses were great, and looking after the non-golfers was very well done even including the shopping! Thanks to the hosts for a great job.

The ship was fantastic, never felt ‘crowded’ wherever you went. I found the facilities excellent. The courses we played were spectacular – I loved every one for the uniqueness, location, and the history! Met some lovely people, had fun every day. Thank you Go Golfing for another smashing holiday. 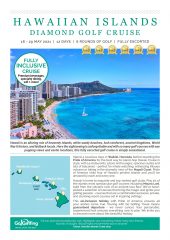 BROCHURE TO BE AMENDED
BROCHURE BEING AMENDED
ASK A QUESTION

• Minimum 5 entrants per home golf club to qualify
• Top 5 scores from each home golf club to count
• The golf club with the highest accumulative total will be crowned the winner
• All members of the winning golf club will receive their time in the spotlight on the stage at the final night dinner and will all walk away with 5 bonus entries into the major prize draw valued at AUD $30,000 + awesome prizes!

Bad Weather: It is a condition of competition that, in potentially dangerous situations play m